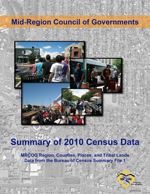 The Mid-Region Council of Governments (MRCOG) has selected key demographic characteristics from the U.S. Census Bureau's "Summary File 1," which contains data from all persons and households during the 2010 Decennial Census. The summary profiles serve as a tool for quick and easy access to 2010 Census Data. Data is provided for the MRCOG region of New Mexico which is served by the Council of Governments: Bernalillo, Valencia, Torrance, and Valencia Counties and the southern portion of Santa Fe County. Tables are provided for counties, municipalities, census designated places (CDP), census tracts, and tribal lands. The county data is limited to the four counties that comprise the metropolitan statistical area (MSA).