Transit mode share is defined as the percentage of total travelers using bus or rail transit. MRCOG analyzes mode share as part of the congestion management process and because the Futures 2040 Metropolitan Transportation Plan set a goal for transit mode share in the region.To calculate the number of vehicle travelers, weekday traffic counts were adjusted using an average vehicle occupancy rate of 1.2 passengers. Weekday bus and rail ridership data were used to calculate the number of transit travelers on each road segment. In 2014, the Central Avenue corridor in Albuquerque had exceptionally high transit mode share.

Greater than 10 percent of total travelers used bus transit in the urban section of Central between Rio Grande Boulevard. and Pennsylvania St. Much of the corridor, particularly in Downtown and Nob Hill, had over 20 percent transit mode share. Three main bus routes served the urban section of Central in 2014: Route 766 (Red Line Rapid Ride), Route 777 (Green Line Rapid Ride), and Route 66 (local and frequent stop service). The implementation of the Albuquerque Rapid Transit (ART) bus system will significantly improve the quality and reliability of transit service on Central. ART will operate on a dedicated bus guideway along much of the corridor, and it will incorporate signal priority at many intersections. The current alignment of Route 777 will be extended west from Downtown to Unser Boulevard, which will dramatically increase the number of transit trips across the Rio Grande. 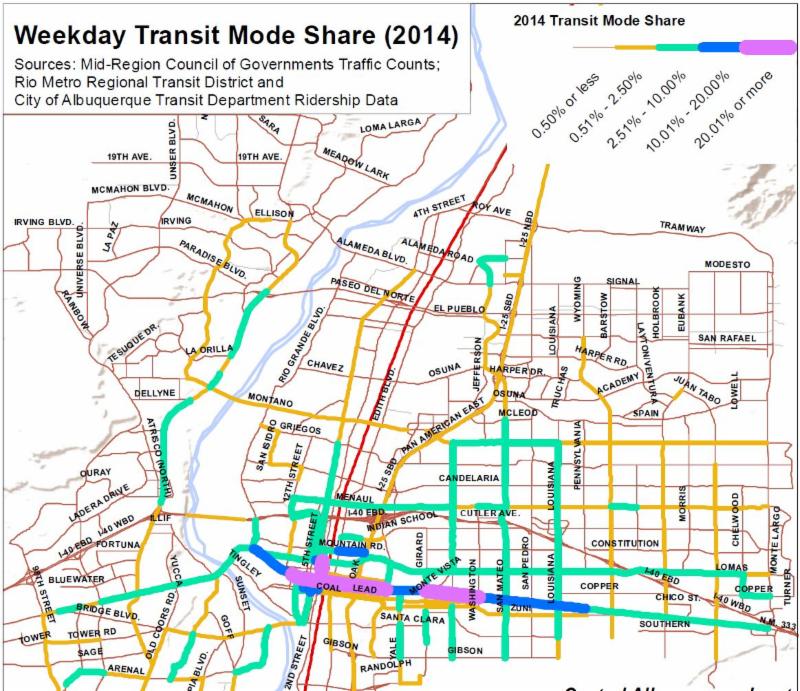