Central New Mexico has been continuously occupied for some 12,000 years, from the time Paleo-Indian people built their first villages along the Rio Grande, to occupation by the farming Pueblos.

In 1540, Captain HernÃ¡ndo de Alvarado and his soldiers became the first Europeans to see the Middle Rio Grande Valley. They were the advance guard for the Spanish explorer Francisco VÃ¡zquez de Coronado. Approaching from the west, when Alvarado first gazed upon this geographical treasure, he saw a broad, grassy valley along a river that Pueblo Indian people had used for centuries to irrigate their crops. 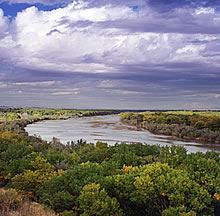 The first colonists arrived about 5- years later. Don Juan de OÃ±ate, sometimes called "The Colonizer of New Mexico", claimed the northern frontier of Nuevo Mexico for Spain in 1598, nine-years before the English settled Jamestown. In the 1660s, the first settlers began farming in the Middle Rio Grande. The first communities were Bernalillo, 1695; Atrisco, 1703 (now an Albuquerque neighborhood); Albuquerque, 1706; Los Lunas, 1716; and Belen, 1741.

Connecting the early settlements was El Camino Real, the famed and historic "Royal Road". This critical trade route would later become U.S. 85 and then I-25. Similarly, east-west trade routes would link the Middle Rio Grande to the plains and to settlements in the west. The railroad and then Route 66 and I-40 followed these old trails.

In 1821, when Mexico won its freedom from Spain, New Mexico became part of Mexico. In 1846, the United States claimed New Mexico, and the Middle Rio Grande Valley gained access to vast new trade areas over the new Santa Fe Trail. The Atchison Topeka & Santa Fe Railroad reached Albuquerque in 1880. Belen became a rail hub in 1907 with the completion of the Belen Cutoff, which saved 10-hours on the Chicago run.

In the 1930's, Route 66 began to snake across New Mexico, originally passing through Bernalillo, Albuquerque and Los Lunas. Just three decades later, interstate highways would begin to eclipse Route 66, just as Route 66 had eclipsed the railroad. Today more than 95-percent of the region's population lives within 30-minutes of an interchange on I-25 or I-40.

With World War II and post-war growth, the population spiraled during the 1940s and 1950s and continued a rapid climb through the 1980s, as the economy diversified.