Willard is an agricultural community in the southern Estancia Basin. A main east-west line of the Burlington Northern & Santa Fe Railway passes through the village. In addition to some recent growth in the dairy industry, Willard has also received an economic shot in the arm in the wind-power arena. In 2009 the High Lonesome Wind Ranch began operations, with 40 three-bladed wind turbines which produce 100 megawatts of electricity, enough to serve about 25,000 homes.
History

The Laguna del Perro and Salina Lake salt flats and lagoons, a source of salt for centuries, are located just east of Willard. Railroad promoter Willard Samuel Hopewell founded the town when the railroad arrived on the scene in the early 1900's, and named it for his son, Willard Samuel Jr. Until the decline of farming in the 1940's, Willard grew as a rail shipping point for ranchers and Pinto bean farmers. At one time Willard boasted four banks and six mercantile stores. 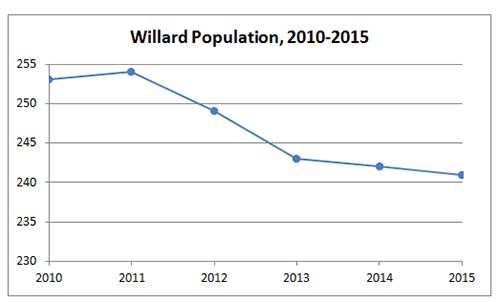