The following chart compares per capita personal income from 2005 to 2014 for the United States, New Mexico, the central region of New Mexico, and each of its four counties. Chart 1 compares over-the-year changes in per capita personal income for the same areas. All dollar estimates are in current dollars, which means they are not adjusted for inflation. 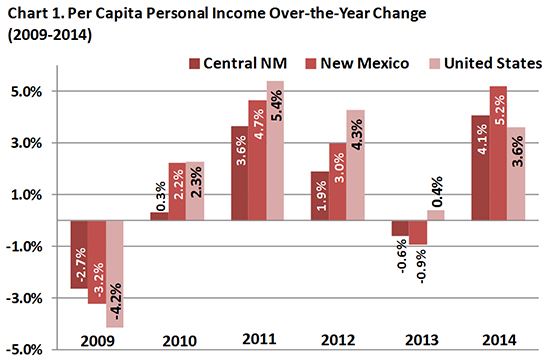 Income changes in central New Mexico have been less volatile than nationwide averages. During the Great Recession from 2008 to 2009, per capita income declined by 2.7 percent in central New Mexico, while it declined by 4.2 percent nationally. Since the recession, from 2009 to 2014, income increased by 9.6 percent in central New Mexico and 16.9 percent nationally. In 2014, average income in Bernalillo County was $38,690, which was the highest of the four counties in the region and 16.0 percent below the national average. Per capita personal incomes in Sandoval, Torrance, and Valencia counties were below the state and national averages, at $36,088, $28,714, and $29,422, respectively.