Central New Mexico, which includes Bernalillo, Sandoval, Torrance, and Valencia counties, is the nation’s 60th most populated metropolitan area. This area represents the majority of the MRCOG region with the exception of southern Santa Fe County. It also represents New Mexico’s State Planning and Development District 3 (SPDD3), which is a designation by the U.S Economic Development Administration (EDA) that guides economic planning and strategic investments.

When New Mexico became a state in 1912, the population within Central New Mexico was small. The population increased rapidly during the 1940s and 1950s with World War II and post-war growth, and continued a steep climb through the 1980s as the economy diversified. Central New Mexico has experienced significant growth, with an average annual growth rate of 3.4% between 1950 and 2010. However, more recent post-recessionary growth has been slow; year-to-year growth has been below 1% for each year between 2010 and 2015. In 2015, the four-county population was 907,301, a total increase of 2.3% from 2010. 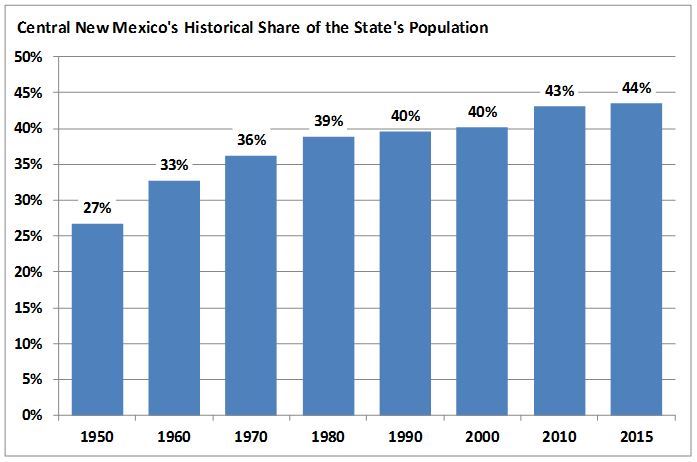 Certain municipalities in Central New Mexico, such as the burgeoning City of Rio Rancho, have grown faster than others. Its smaller neighbor, the Town of Bernalillo, has also seen substantial growth, assisted by commuter rail stops within its boundaries. The City of Albuquerque has seen sustained growth, but the population leveled off at 559,121 in 2015, which was only 2.4% higher than in 2010. Valencia County growth, while slower in rural areas and the City of Belen, has seen growth in its largest municipality, the Village of Los Lunas, with many new subdivisions coming on line over the decade. The percentage of the four-county population that was in incorporated municipalities has increased from 70% in 1960 to 79% in 2015, indicating an increased urbanization of Central New Mexico.

Population growth in Central New Mexico has been significantly dampened by the recession. In the years immediately following the recession, permits issued within Central New Mexico plunged from a high of over 10,000 in 2005 to below 3,000 every year since 2008. Recovery of the construction industry and the number of housing permits has been somewhat stagnant statewide. Chart 2 shows the course of new housing starts from 2000 to 2014 in the area’s three largest municipalities. 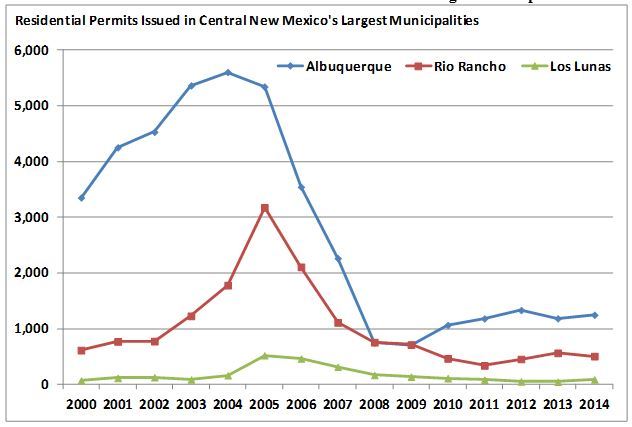 New Mexico is a southwestern state that shares a border with Mexico and has a rich history rooted in Native American populations, Spanish settlements, and European immigrants. This diversity is reflected in its racial and ethnic composition. Table 3 shows that while just 18 percent of the national population identify as Hispanic or Latino, 48 percent of Central New Mexico’s population, and as high as 60 percent of Valencia County’s population, identify as Hispanic or Latino. In addition, Central New Mexico has a much higher American Indian population percentage than the national average, which is as high as 12 percent in Sandoval County.