The transportation system must be safe for all modes. This is of particular concern for our region since New Mexico and the City of Albuquerque have been identified as a Focus State / Focus City by the Federal Highway Administration because of high pedestrian and bicycle fatalities.

The latest crash data that is available is from 2016, and was recently received from the UNM Geospatial Population Studies department who contracts with the New Mexico Department of Transportation Traffic Safety Bureau to geo-locate crash data for our region.

MRMPO analyzes crash data to determine which areas need improvement and produces safety reports that include crash rate information for the Albuquerque Metropolitan Planning Area (AMPA) using our traffic counts data. Although our reports are updated with the most recent data available, because of the time it takes to collect and geocode crash data it is a couple of years behind. New Mexico Department of Transportation Traffic Safety Bureau (NMDOT – TSB) collects the data from police departments, and has them geocoded by the University of New Mexico Geospatial and Population Studies department.

MRMPO obtains this geocoded crash data to assist member agencies and the public with understanding crash information and transportation planning issues confronting the AMPA region. This task results in a number of processes and products on safety issues and Metropolitan Transportation Plan (MTP) implementation, as well as the development of projects for the Transportation Improvement Program (TIP).

The Regional Transportation Safety Action Plan (RTSAP) analyzes crash data from 2011 to 2015. This plan focuses on fatalities and injuries, and includes crash statistics for walking, biking, motor vehicle, and motorcycle travel. This safety plan is more extensive than previous crash reports, and includes expanded data analysis as well as specific action items to help the region improve our roadway safety.

Through data-driven analysis, agencies and public input, targeted field visits, and national best practice research, the RTSAP identifies key safety emphasis areas and action items to target safety improvements from policy to enforcement to design for all roadway users. The RTSAP was developed on the premise that we have to balance a fast commute with safer roadways, and prioritize safety for all modes over speed. Sometimes taking a minute longer to get to your destination can save a life.

Vision Zero is an approach that includes a variety of strategies and that rebukes the idea that there is an inevitable amount of death and injury within our public roadways. Rather, traffic collisions are not “accidents,” which implies an incident was unavoidable, but should be referred to as traffic crashes—preventable incidents.

The RTSAP was adopted on August 17, 2018 and it recommends a new approach to roadway safety that includes a vision to eliminate traffic fatalities and decrease serious injuries. In addition to a vision to reach zero fatalities, year by year goals have also been established in this plan. The RTSAP Resolution (PDF) encourages local jurisdictions to look into adopting Vision Zero as well.

MRMPO was able to identify recurring patterns in specific locations to target problem areas and responsibly invest limited funding. For example, the High Fatal and Injury network (HFIN) includes all fatal and injury crashes – it focuses on the most dangerous streets and intersections. Specifically, those corridors and intersections that are over, or 2 times, the mean for large urban, small urban, and rural areas. Pedestrian crashes per mile over the mean are also included.

This information is not meant to comment on what has not been done, but rather be a guide for future decision making so that we can make the greatest impact. Another analysis done through this planning effort looked at roadways that may be candidates for potential Road Diets which is also provided in an interactive map below.

This targeted approach (the HFIN) is particularly important since 64% of the total fatalities and injuries occur on only 7% of the Major Roads (Collectors and Arterials) network.

Take a look at these interactive maps developed through the RTSAP planning effort:

Findings in this report are based on the best information available about the quantity and severity of crashes bicycle and pedestrian crashes, along with the details such as location, time, date and basic information about the people involved in the crash the report provides. Details underlying the cause of the crash are also provided by the reported top contributing factor to the crash. Work on the report was done in collaboration with the Healthy Here: Communities Leading Healthy Change Initiative funded in part by the Center for Disease Control.

MRMPO completed an online report for the years 2009-2013. This report provides an overall view of crashes in the AMPA. Some highlights include intersection crash rates, pedestrian crash density, alcohol/drug involvement crash statistics, and age and gender breakdowns. 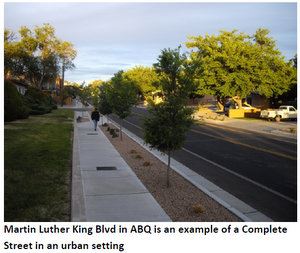