BRT can include any or all of these features:

Examples in Other Cities 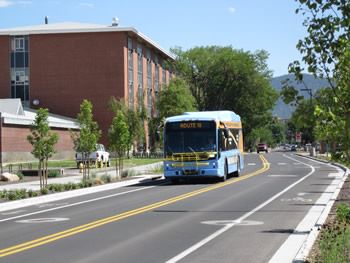 The Emerald Express (EmX) is a Bus Rapid Transit system linking downtown Eugene to downtown Springfield and including stops at the University of Oregon and Sacred Heart Medical Center. Over 60% of the route consists of dedicated bus lanes, allowing buses to avoid traffic congestion. This increases bus speed and reliability. The bus lanes consist of two concrete tire tracks surrounded by grass, which not only looks good but also allows rain to soak into the ground instead of running off.

Many EmX stations are located in the median, allowing passengers to easily travel in either direction, and buses have doors on both sides. Passengers buy their tickets from ticket machines at the stations using cash, debit cards, or credit cards. EmX stations are also raised to be level with the bus floor. This allows people with wheelchairs, strollers, and bikes to roll straight onto the bus, instead of having to use a retractable ramp like on most buses.

EmX buses arrive every 10 minutes during the day, 15 minutes during evenings and Saturdays, and 30 minutes on Sundays. After the success of the first EmX line, Eugene opened a second line in 2011, and more are planned.

Mountain Link is a new bus route connecting Northern Arizona University (NAU) to downtown Flagstaff and nearby residential and commercial areas. The bus runs through the middle of the NAU campus on a street that only allows buses, pedestrians, and bicyclists. Off-campus, the bus shares the road with cars.

Buses arrive every 10 to 15 minutes on weekdays and every 40 minutes on weekends, and real-time data lets riders see exactly where the buses are at any time. Mountain Link carries up to 4,000 riders per day, far more than any other route in Flagstaff. It is jointly funded by NAU and the regional transit provider.

El Paso recently began construction on a new rapid bus system known as “Brio.” Brio buses will be faster than existing buses and have fewer stops. The bus stations will include shade structures, WiFi internet access, real-time displays telling when the next bus will arrive, and ticket machines so that passengers can pay before they get on the bus. These ticket machines will accept cash, debit cards, and credit cards.

Fort Collins is currently building a five-mile Bus Rapid Transit “MAX” corridor along Mason Boulevard, connecting downtown, Colorado State University, and other major destinations. MAX will operate in a bus-only lane for most of the route, allowing buses to bypass traffic congestion. Passengers buy their tickets from ticket machines at the stations using cash, debit cards, or credit cards.

MAX is the backbone of a larger plan to revitalize the Mason corridor. Fort Collins is building new pedestrian and bicycle paths and using MAX to attract new development to the area, highlighting the economic development potential of Bus Rapid Transit.